Like most Americans, I was absolutely horrified by the violence that I watched at the U.S. Capitol on Wednesday. But I had a difficult time trying to understand what I was witnessing. Trump supporters are almost always extremely peaceful, but many of those that were storming the Capitol were being very violent. That didn’t make sense to me. And how in the world did protesters get into the U.S. Capitol in the first place?

Well, it turns out that police actually opened up the barricades that were surrounding the U.S. Capitol and purposely allowed protesters to storm the building. You can see this on video right here …

Police opened gates and offered them in 😡 pic.twitter.com/cFJmIekwzR

I have never seen anything like that in my entire life.

And once they were inside the building, they were herded toward particular areas. For example, you can watch one “guard” actually lead protesters up several flights of stairs right here …

Psyop. Look at the photographers while going up the stairs and at the end. The officer is leading them where to go and gives the guy a little nudge and says “they’re here” when at the 2nd floor and officers just walk up and say “leave”. Paid crisis actors to look like agitators pic.twitter.com/U3BJ4REtpz

Either the U.S. Congress has the worst security personnel that any of us have ever seen, or this was allowed to happen on purpose.

And there are multiple reports that Antifa activists were brought in by bus. In fact, one patriot actually recorded video of the Antifa buses that were brought into the heart of Washington D.C. with an escort…

Pantifa was bussed in. pic.twitter.com/lRL9vKYlRe

So who arranged for those Antifa buses to have that sort of an escort?

It is almost as if someone was extremely determined to get those Antifa activists to their location so that they could do their job.

Once they got inside the Capitol, the Antifa activists could have done a much better job of disguising themselves.

In fact, one has already been positively identified as a member of Philly Antifa… 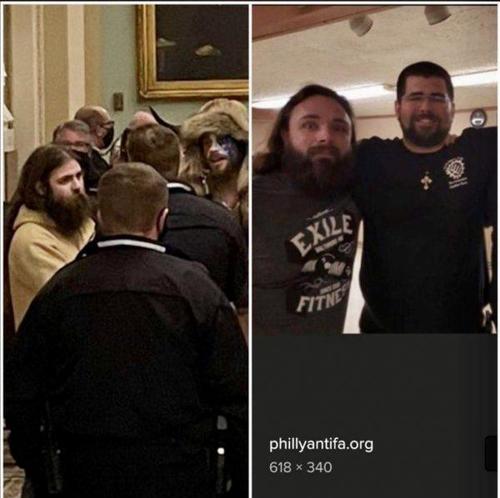 If he wanted to pass as a “Trump supporter”, he probably should have covered up the hammer and sickle that are tattooed on the back of his hand… 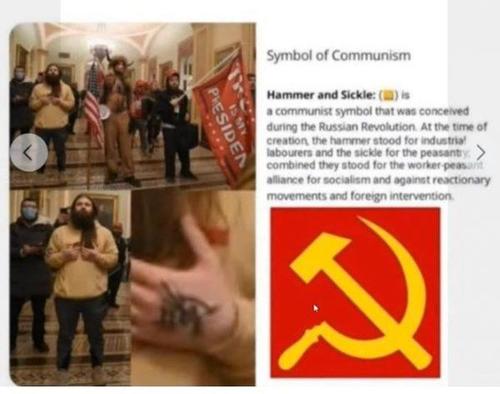 Perhaps the most famous “protester” from the chaos on Wednesday is “the guy with the Viking horns”.

Well, it turns out that he was photographed at a BLM rally in Arizona wearing the exact same outfit back in June …

Trump supporters don’t usually attend “climate activism” events. The guy is an actor. Who knows what side he’s on? pic.twitter.com/jE1aXQgH4b

Apparently his name is Jake Angeli and he is a “shamanic practitioner”. But on Wednesday he was posing as a hardcore Trump supporter.

So why can’t the mainstream media put any of these pieces together?

It shouldn’t take too much detective work to identify a lot of these people.

So why won’t they do it?

And did you notice that the police let the vast majority of the “protesters” go without arresting them once it was all over?

The mainstream media is insisting that “they will be arrested later”, but a lot of people aren’t buying that.

All of this just seems very odd to me.

Just as a debate about the evidence of election irregularities was about to begin in the halls of Congress, these riots conveniently broke out.

Members of Congress were quickly evacuated, and the millions of Americans that were watching never got to see an honest debate about the 2020 election.

When proceedings finally resumed, the entire atmosphere had completely changed, and all of a sudden hardly anyone was interested in debating whether the election results were legitimate or not.

So who actually benefitted from the riots?

Also, it is important to note that these riots have dealt a severe blow to any political future that President Trump hoped to have.

So with one stone, activists have neutered the debate over the legitimacy of the election and they have devastated the Trump movement as well.

It appears that someone really was playing “3D chess”, and it wasn’t Trump and his supporters.

And this is just the beginning. As I keep warning , the radical left will never be satisfied until they accomplish all of their goals.

Electing Joe Biden was just a way to get rid of Trump. The radical left actually doesn’t like Biden either, and they will fight him bitterly if Biden does not go along with their full agenda.

In the end, what they want is a full-blown “revolution” in this country. And as we witnessed on Wednesday, they will go to extreme lengths in order to get what they want.

Michael’s new book entitled “Lost Prophecies Of The Future Of America” is now available in paperback and for the Kindle on Amazon.