(Zerohedge) – Multiple news sources including The Drive and The Daily Mail are detailing a mysterious encounter between an American Airlines flight and what the pilot has described as a mysterious, ‘long cylindical object’ which was fast-moving over New Mexico on Sunday .

AA Flight 2292 had been en route between Cincinnati and Phoenix when the crew was startled by the strange object which ‘almost looked like a cruise missile’ – according to the audio – flying over their aircraft which was at an estimated 36,000 feet at the time of the sighting, according to details in The Drive .

Amazingly the pilot’s reaction to the strange encounter was actually recorded, with the radio transmission subsequently published to the space and aviation analysis blog, Deep Black Horizon .

A startled pilot can be heard radioing to Albuquerque Air Traffic Control: ‘Do you have any targets up here? We just had something go right over the top of us!’

The pilot is then heard saying:

‘I hate to say this but it looked like a long cylindrical object that almost looked like a cruise missile type of thing – moving really fast right over the top of us .’

Here’s a recording of the event via Daily Mail :

At the moment of the ‘cruise missile-like’ object’s sighting, the airliner was doing about 460 miles per hour. There’s yet to be official comment from either the FAA, American Airlines, or the US military.

Below are the flight details and transcript of the audio snippet as picked up by Deep Black Horizon :

At approximately 1:19 CST on the Albuquerque Center frequency of 127.850 MHz or 134.750 MHz (recording wasn’t frequency stamped) the pilot reported: ‘Do you have any targets up here? We just had something go right over the top of us – I hate to say this but it looked like a long cylindrical object that almost looked like a cruise missile type of thing – moving really fast right over the top of us.’

According to Flight 24 and Flight Aware AAL 2292 was over the northeast corner of New Mexico west of Clayton, New Mexico. No reply was monitored by Albuquerque Center because local (Amarillo) air traffic walked on top of it. AAL 2292 was near flight level 370 (37k) at the time of the report.

No significant military aircraft presence was noted on ADS-B logs.

The AA flight later landed in Phoenix, Arizona without incident and according to schedule.

The Drive speculates on what the pilot might have seen, while saying it’s unlikely to have been a simple case of a military flight that civilian aviation authorities weren’t warned about or notified of: ‘As to what the pilots aboard American Airlines Flight 2292 could have actually seen, we really cannot say at this time. Many will point out that New Mexico is home to the sprawling White Sands Missile Range (WSMR) along with a bevy of other military facilities , installations , and restricted areas ,’ the report notes.

‘Still, the chances that a missile could have ‘gone off the reservation’ during a test or some other standard military explanation seems unlikely,’ according to The Drive’s analysis. ‘There are procedures in place for this sort of thing and pilots would have been alerted to the safety hazard.’ 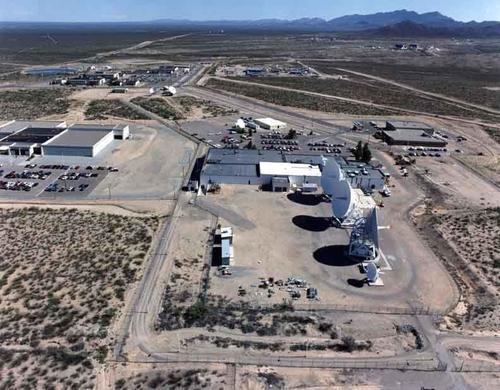 As is also detailed in The Drive report, this is certainly far from the first time such an bizarre, close encounter took place between an airliner an unidentified flying object. Indeed New Mexico and the southwest US in general seems to have recorded more such strange flights and sightings than other parts of the country both in recent years and historically in the 20th century.